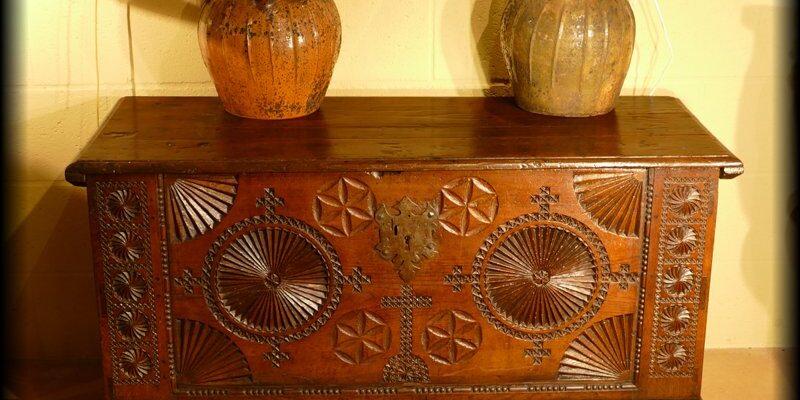 The secret code to enter the spiritual universe of this chest overloaded with messages is undoubtedly the number 6.

Keep it in mind to sharpen your gaze.

Around the Latin Cross located under the keyhole, four 6-pointed stars immediately illuminate the facade. Theses stars represent IX monograms. An essential concept to penetrate the mind of the image maker who sculpted this prodigious piece of popular art furniture in the 18th century.

The IX monogram is the primitive form of the Christian cross, formed from the two initials of the name of Jesus Christ in Greek. Namely the letter “I” or Iota for Iesous (Ιησους, Jesus in Greek) and “X” or Chi for Christos (Χριστος, Christ in Greek).

Combining these two letters, this symbol become a monogram, in this case the Christogram, the seal of the Lord.

Legend has it that shortly before his conversion to Christianity in 312 A.D., the pagan emperor Constantine the Great saw “a cross of light in the sky at noon.” Historically, this meeting of the Cross with the Sun appears as a pagan-Christian syncretism that enabled a particularly cruel emperor to rally to his troops the followers of a religious current then in full swing, primitive Christianity, and to invent the concept of monk-soldier, which is contradictory to say the least, but that is another story.

Let’s get back to the pure and sincere inspiration of the furniture carpenter observing these beautiful chestnut planks thanks to which he will make, at the request of a rich peasant from Béarn, this splendid wedding chest. The bride will take it away on her wedding day, filled with her trousseau, sheets and personal effects. Note in passing, and inside the said chest, the small hiding place where she can deposit her jewels and precious documents.

So, exploding right in the heart of the facade of this wedding chest, four 6-pointed crosses evoke the advent of the Christian faith by taking up – and this is what makes them so important – the shape of the primitive cross and so all its symbolism.

So that the 6 directions of the IX monogram give birth to the sphere which symbolizes both the terrestrial world and the entire universe.

What’s more, the 6 directions of the IX monogram evoke the Tree of Life which is inscribed in the sphere. It plunges its roots into death to give life and rise into the sky.

What more beautiful omen sent to newlyweds to ensure sacred union and fertility within their homes?

In addition, so as not to really leave anything to chance, these IX monograms are supported and accompanied by other symbols, which count as many additional wishes for happiness and longevity. Let’s take a closer look.

On either side of the facade, two large suns are composed of tight concentric rays pointing in their centers to two smaller, more discreet IX monograms – which makes 6 of them with the four mentioned above.

These suns are surrounded by circles supported by four Latin crosses. These are made up of 6 identical segments, four for the central bar and two for the crossbar. These suns surrounded by wheels punctuated with crosses globally symbolize renewal, infinity, the eternal renewal of life.

In addition, the four corners of this central panel are decorated with St James’s shell. They also carry a clearly identified Christian message. In the Middle Ages, the scallop shell became the rallying sign of pilgrims to Compostela, in Galicia, this wonderful coastal region in northern Spain. According to the Codex Calixtinus, this shell has indeed been associated since the 12th century with respect for good works. The two valves of the shell representing the two precepts of love, namely: to love God more than anything and to love your neighbor as yourself.

Note also that the uprights and feet of this wedding chest have, on either side, a column of 6 decorated wheels. The wheel evokes, as we have seen previously, renewal, the eternal passage, the cycle of perpetual recreation. The wheel is a universally recognized lunar, solar and cosmic symbol.

Finally, the sides seem to constitute the ultimate apotheosis of the work of the furniture carpenter who strove to carve in the center of the shells, located at the four corners of the panels, a remarkable pattern of rosettes with 6 branches, a pattern worked in orbevoie (blind windows) Gothic in style, clearly inspired by the splendor of cathedral stained glass windows.

In the end, both in terms of qualitative investment and spiritual commitment, this folk art chest has a very unusual bill. It celebrates in a grandiose and magnified way, the sacred bonds of marriage.