Our collection of antique pottery is constantly changing and some of the items shown on this site or in our brochures may already have been sold. Please feel free to contact us.

An exceptional choice of antique pottery

In the 18ᵗʰ Century, from the majestic cathedral and the humble home to the lighting on the street, the main source of energy was walnut oil. It was used to fuel lamps, hence the importance of oil jug storage capacity. Their manufacture was subject to one-upmanship between potters who competed for technical talent, originality and trademark in the production of practical yet decorative earthenware.

Today, oil jugs are part of our cultural heritage and are testimony to a craft that has completely died out.

From the mid 19ᵗʰ Century, due to the import of lighting fuel and the discovery of tin, tin and zinc pitchers replaced the clay jug, which fell into disuse. The jugs became obsolete but were rediscovered only after the Second World War. Since then they have been considered antiques.
In addition to oil jugs, Aux Rois Louis Gallery displays a selection of beautiful kitchen utensils in earthenware from the 18ᵗʰ and 19ᵗʰ Century.

Water jugs, colanders, vinegar, pitchers, water bottles and kegs evoke a lifestyle and know-how of the best potters of Quercy, Auvergne and Périgord.

Below you can see a few samples of our vast collection of old pottery. Please do not hesitate to consult us. 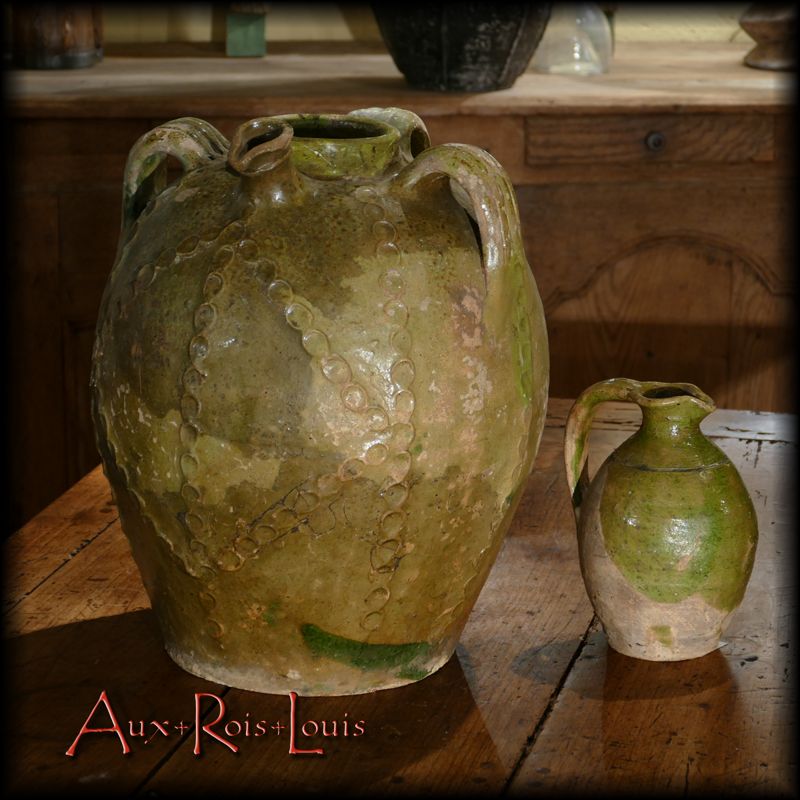 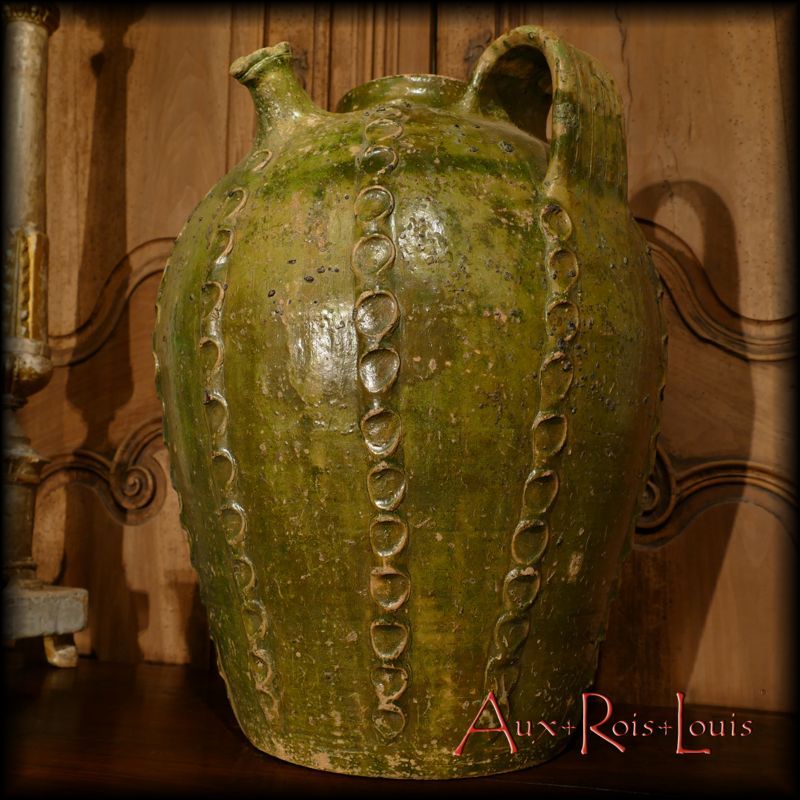 The beautiful ovoid shape of this oil jug from the Beauronne – Douzillac pottery center, its fine spout and its water-green glaze enhanced with digitized bands give it a notorious elegance.. Reference : [PA038]. 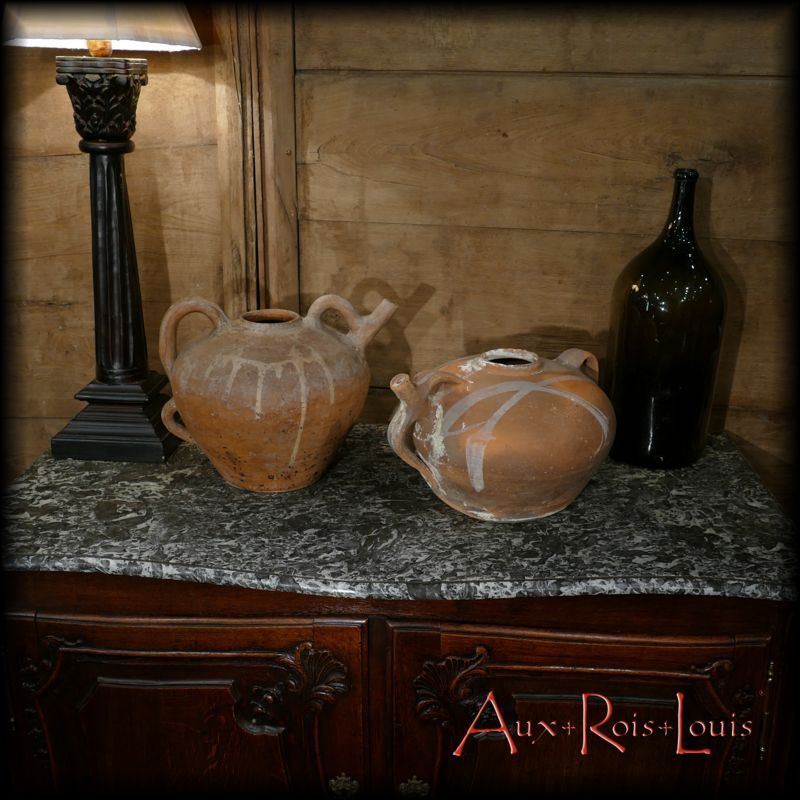 Carried on the heads of women who went to fetch water from the village well or fountain, these jugs are called “head jugs”. In order to make the task less painful and less perilous, these water carriers made a straw wreath wrapped in fabric which they placed between the jug and their hair. These jugs… 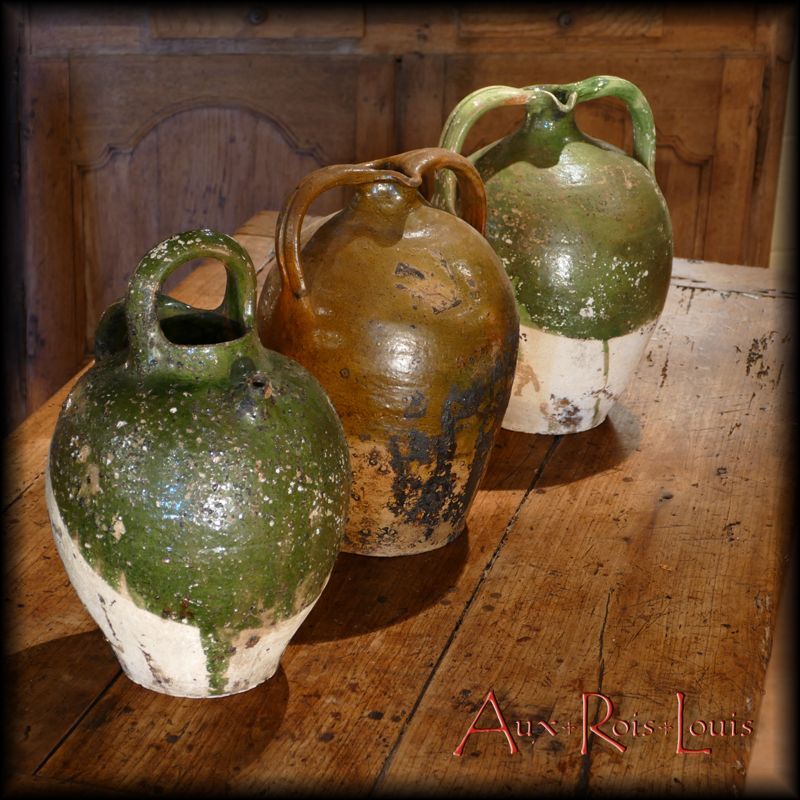 These three water jugs come from the pottery center of Beauronne – Douzillac, which is easily recognized by the nature of the clay used: a white clay, loaded with kaolin. Most of the production of this renowned center has a green glaze, like the pottery in the background [PA035], hence the originality of the brown… 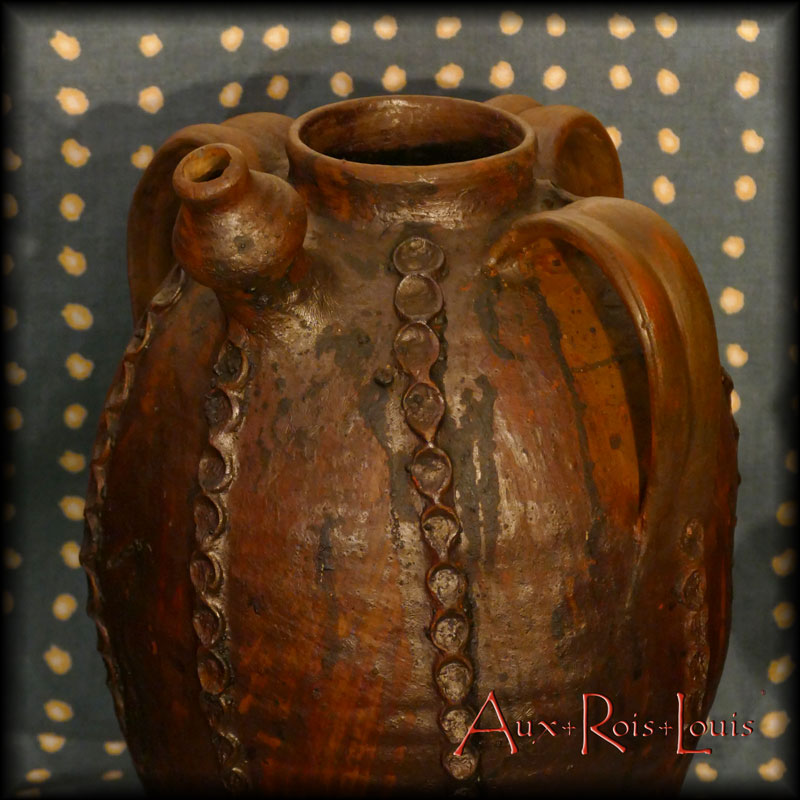 This oil jug has a set of distinctive signs which inevitably links it to the famous pottery center of Beauregard de Terrasson in Périgord. Observe rather: it was turned in a sandstone clay, covered with a glaze of tint “wine lees” obtained thanks to the local manganese and its beak presents a bulbous form, also… 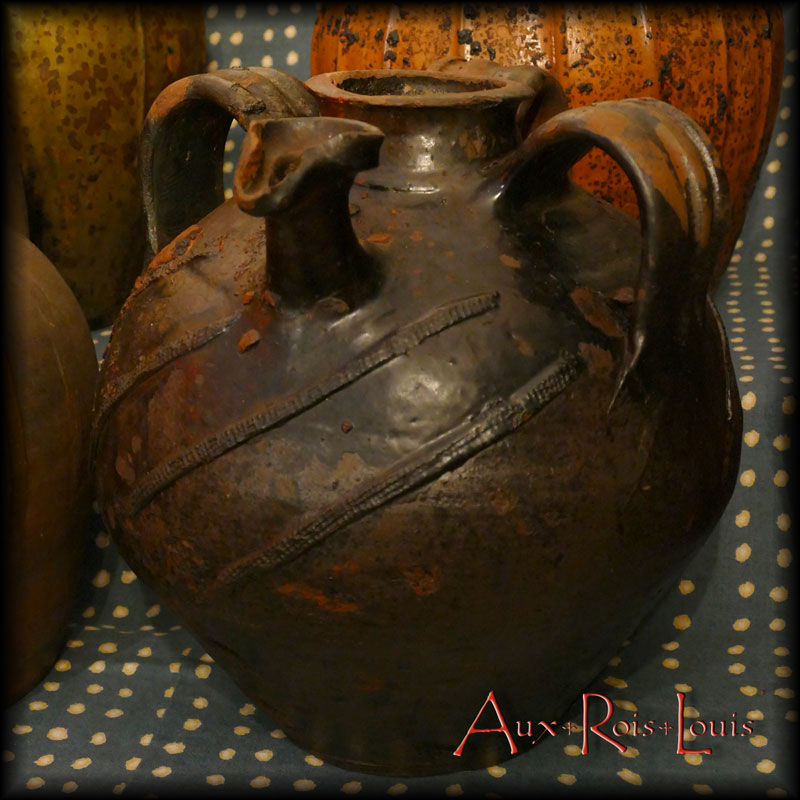 This elegant oil jar, turned in the 18ᵗʰ century, is distinguished by its slender upward handle, its pinched spout, its gray brown glaze made with manganese and its decoration of knurled strips arranged diagonally. So many particular signs in this region of production, the Quercy, which make us perceive the inventiveness marked with pleasure of… 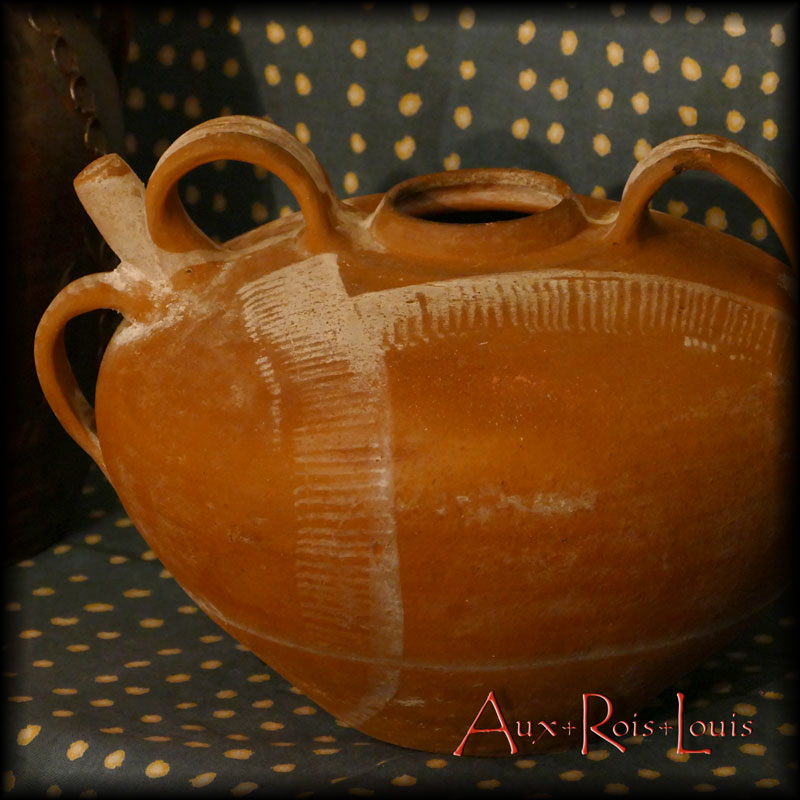 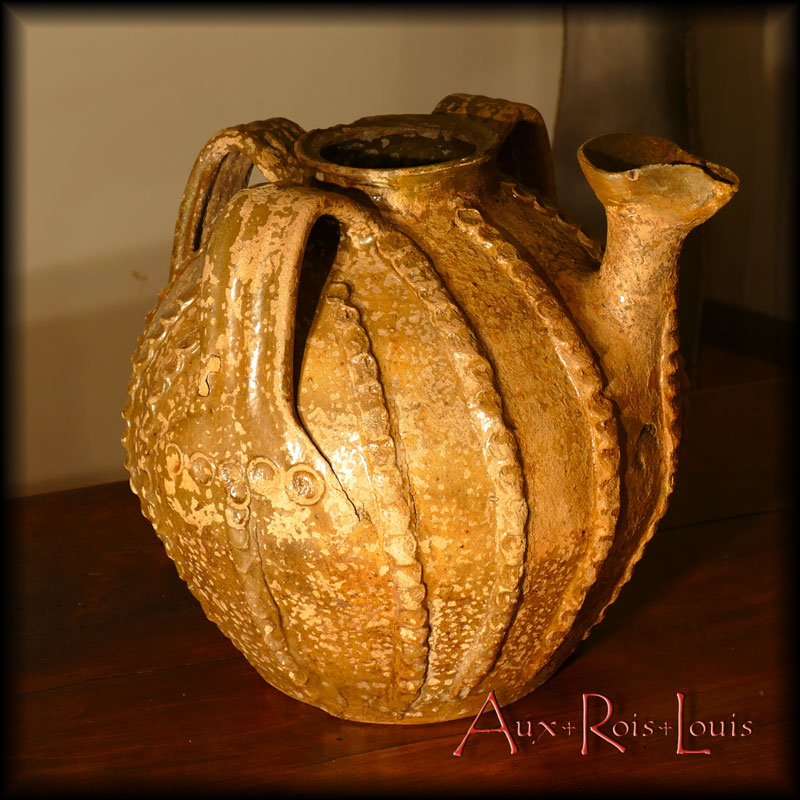 Oil jar – 18ᵗʰ century – Périgord This exceptional oil jar called “du Bugue” is a primitive model of this legendary potter’s center in the heart of Périgord noir. Among its particular signs are its large pinched spout, its wide fluted handles and its wide digitized bands, 15 of which one ends very high under… 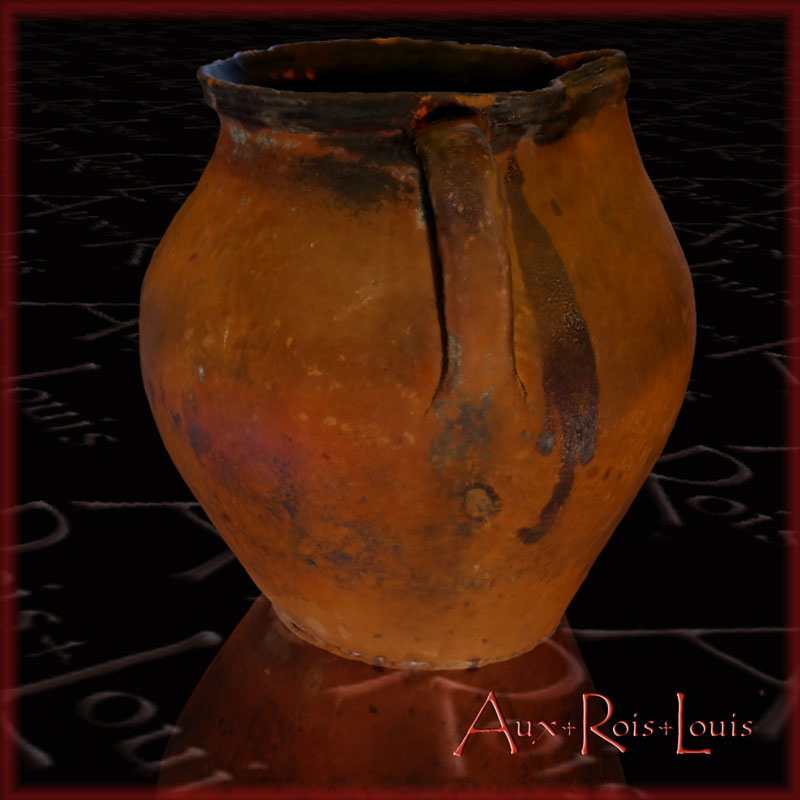 Cooking pot – 19ᵗʰ century – Auvergne Cooking pot for the chimneys, to be positioned in the hearth, glazed only inside. Reference number: PA3D002. 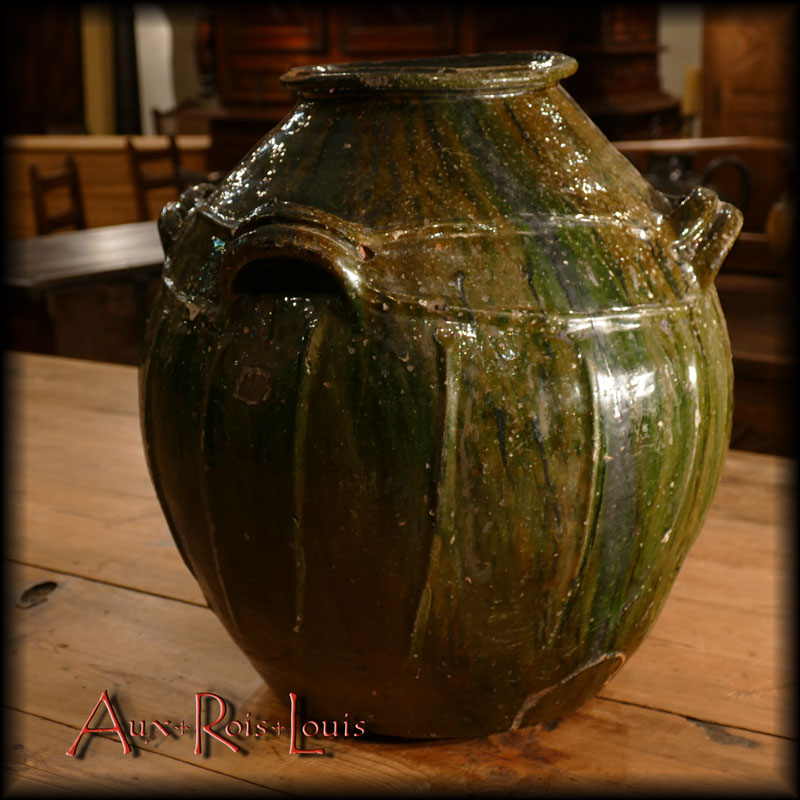 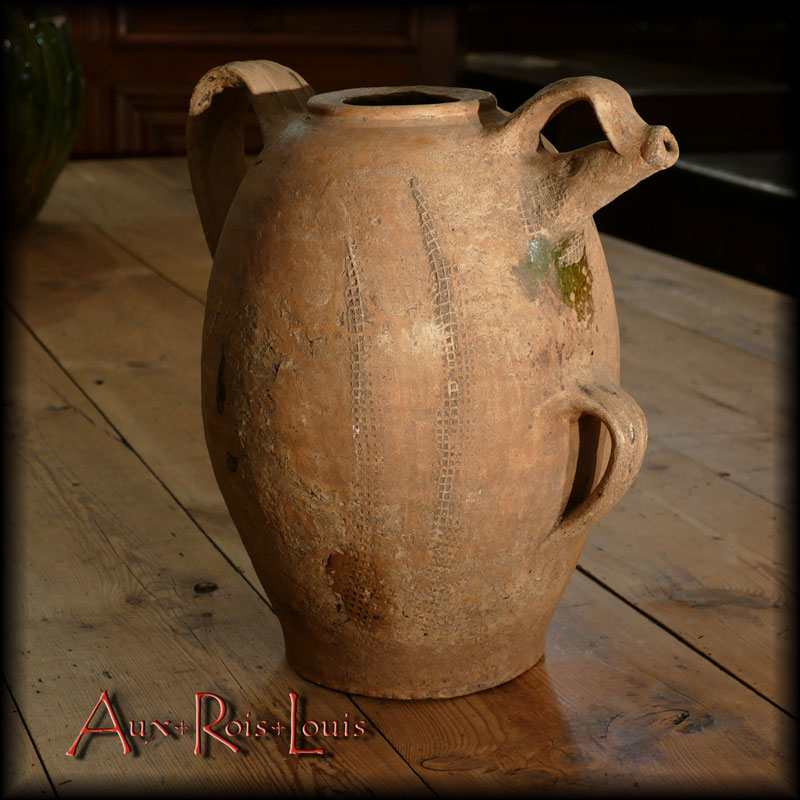 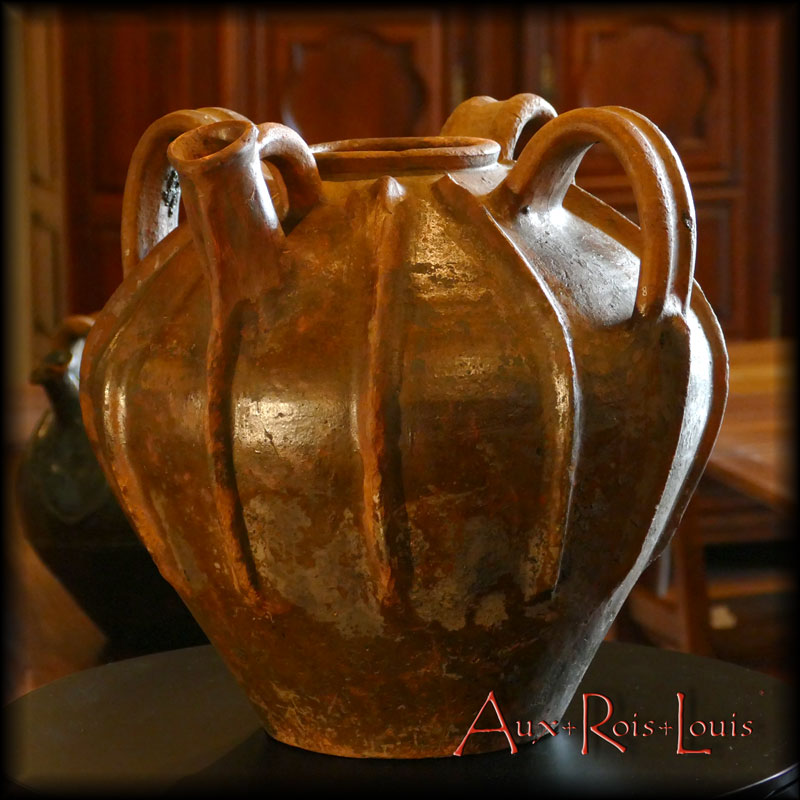 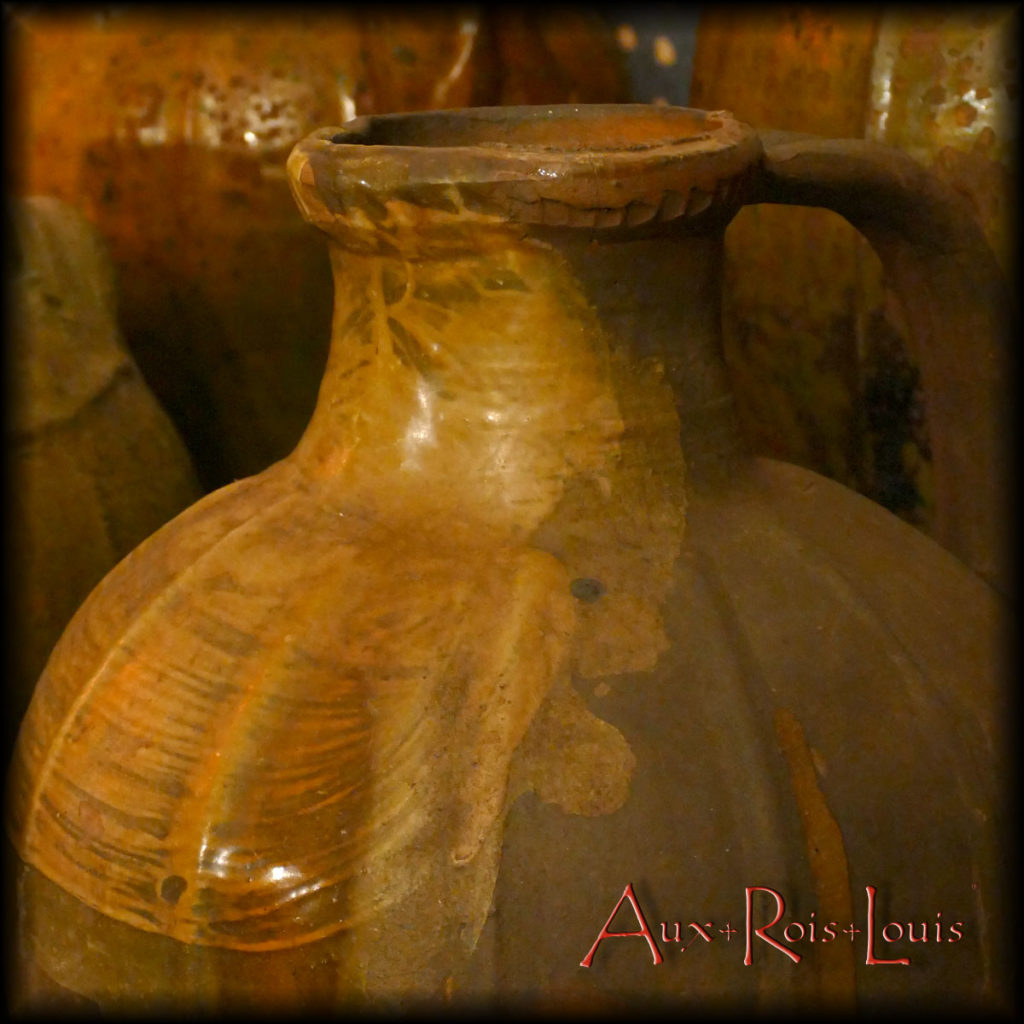 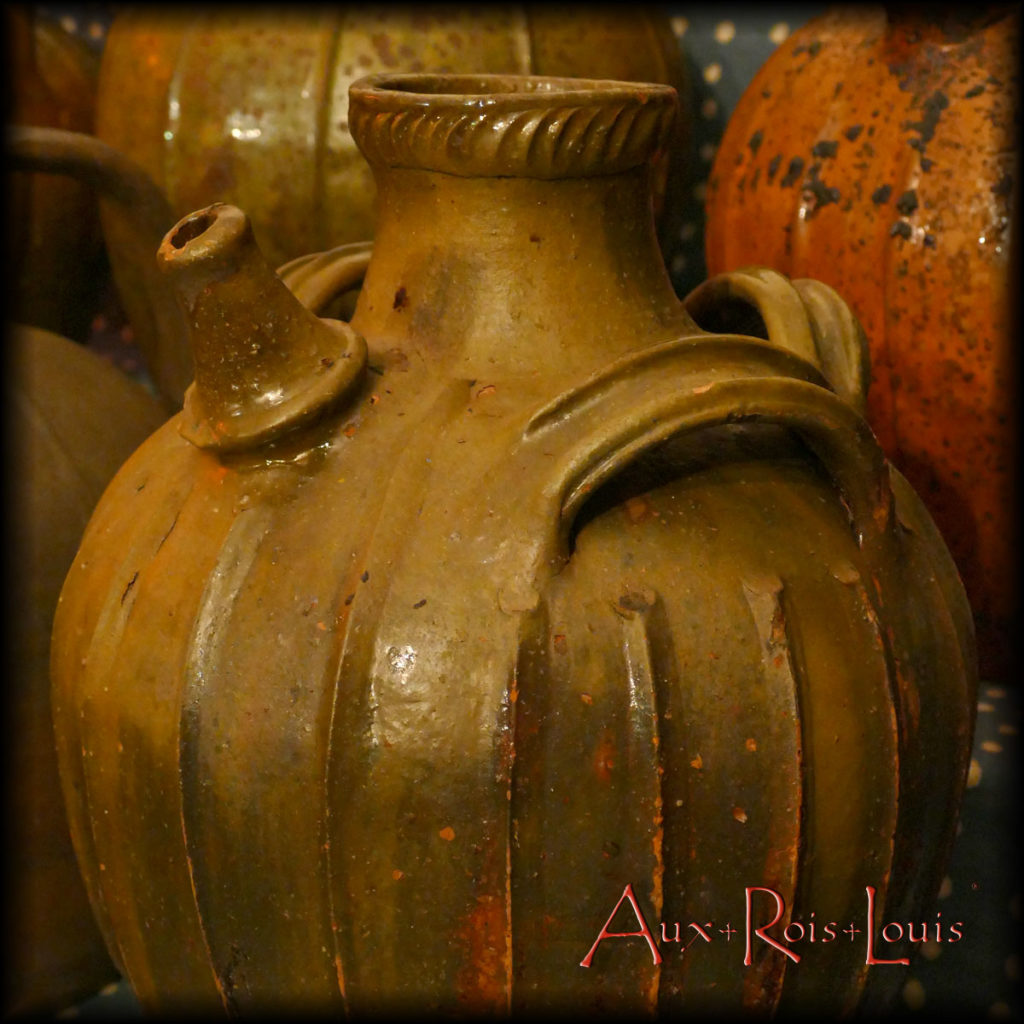 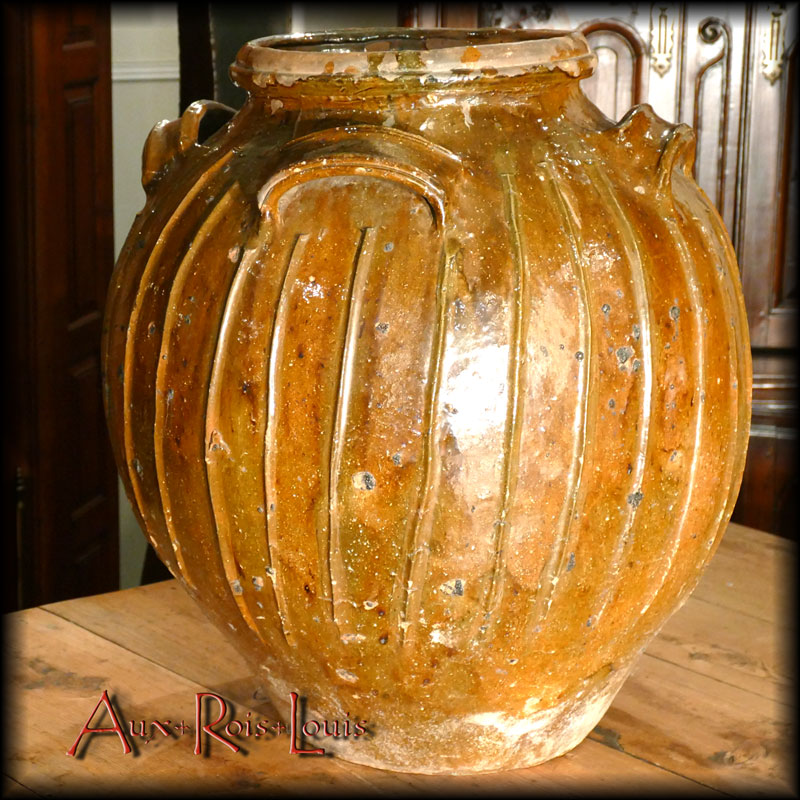 Glazed earthenware « mélard » – 18ᵗʰ century – Puy de Dôme The size of this commonly used piece of pottery is absolutely amazing. In days gone by, it was used for storing nut oil in mills, châteaux and monasteries. In the 18ᵗʰ century, nut oil was used exclusively for lighting purposes in public places. This jar… 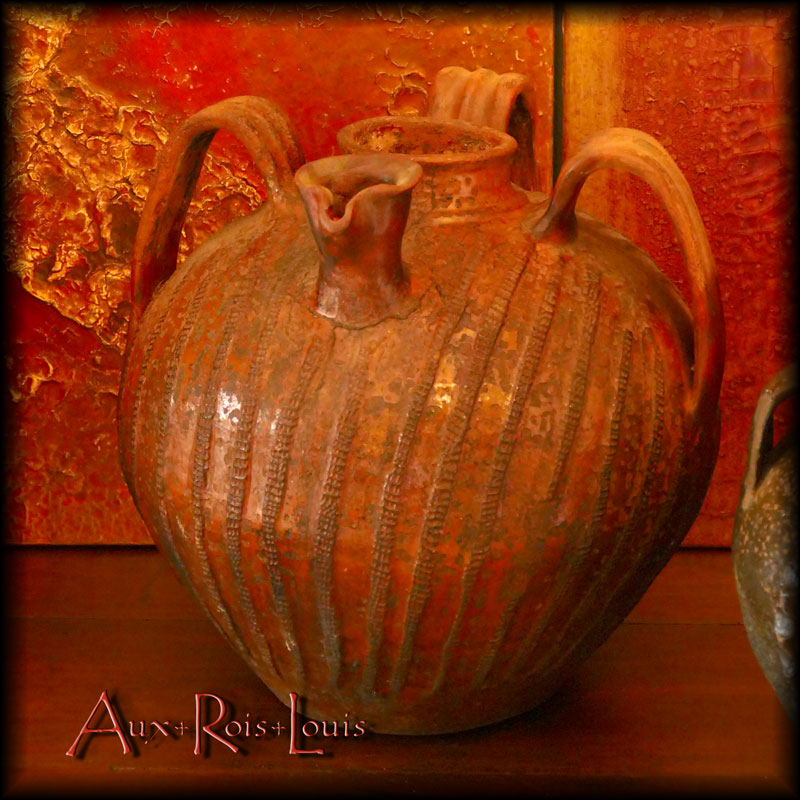 Dimensions: height 41 cm. Restoration on a handle. Price on demand. 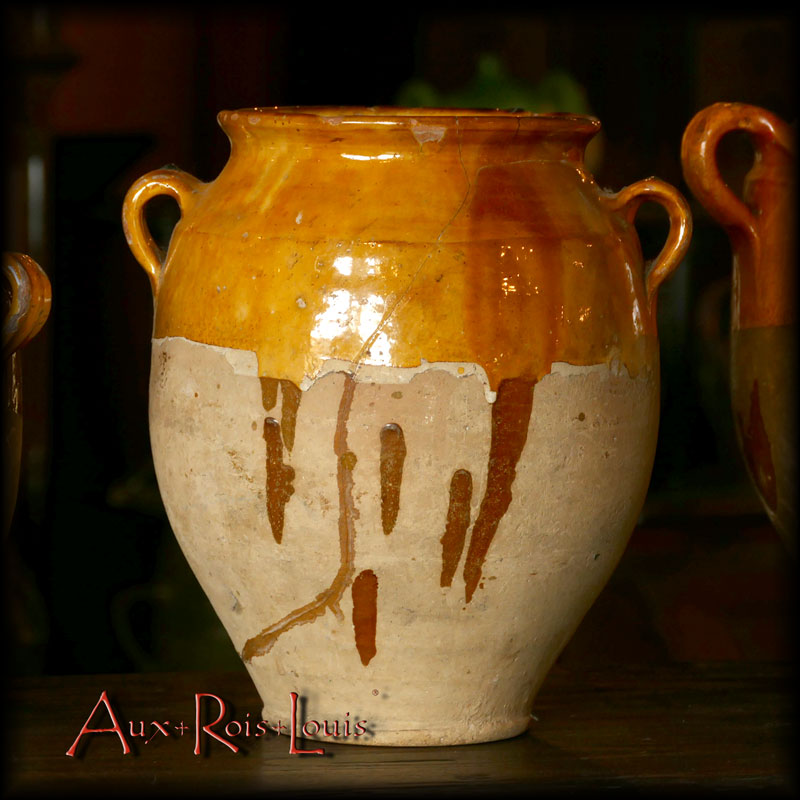 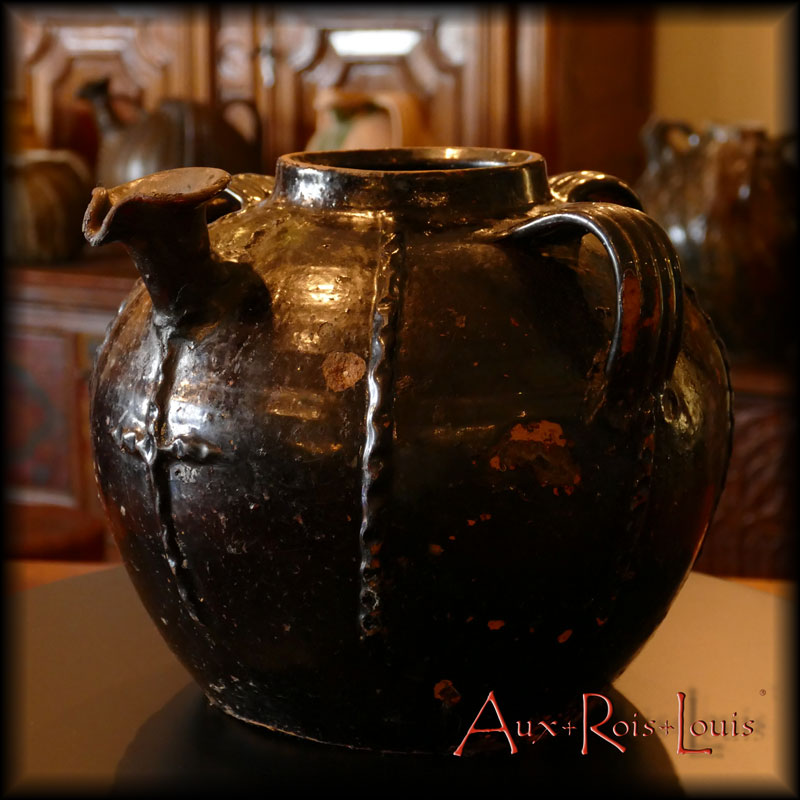 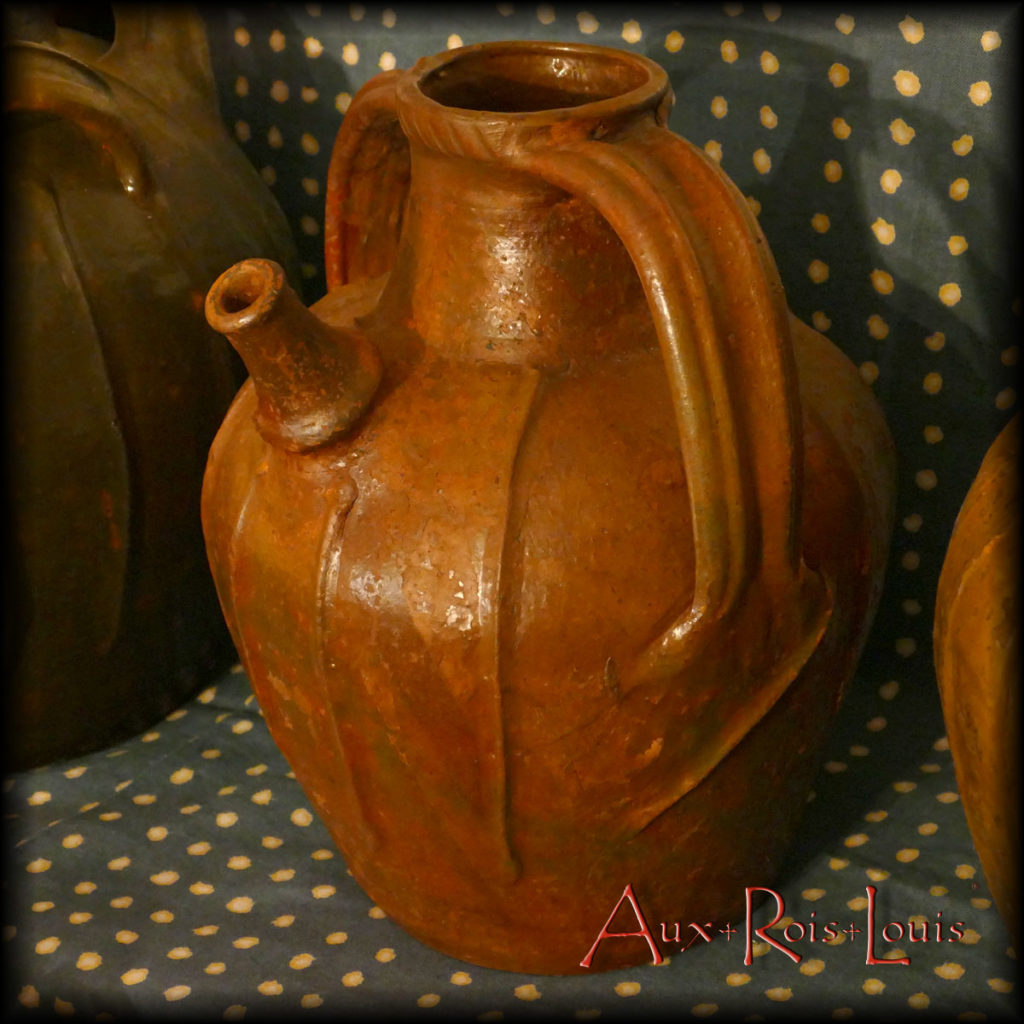 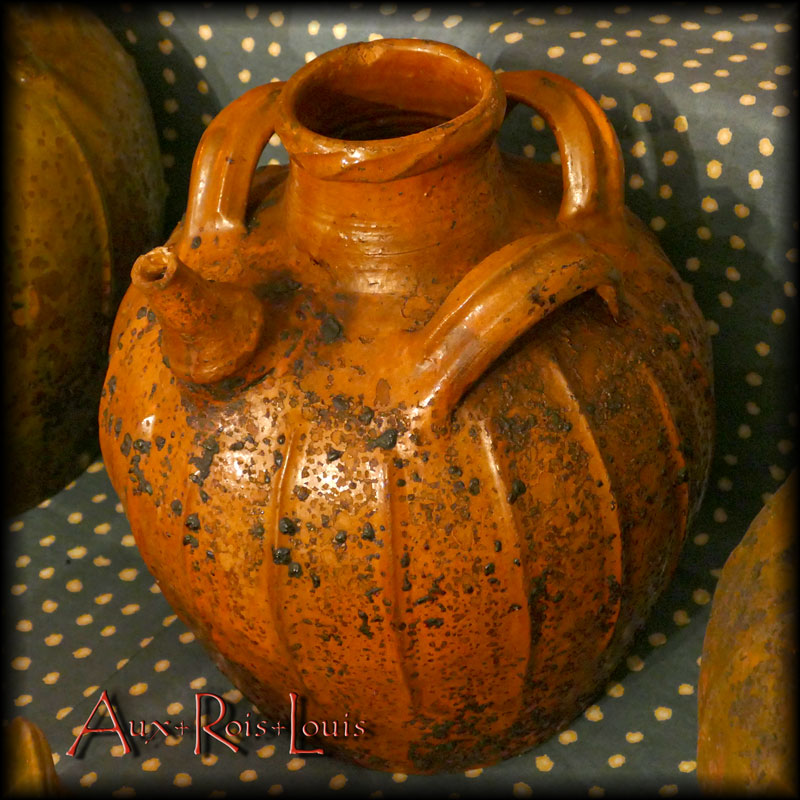 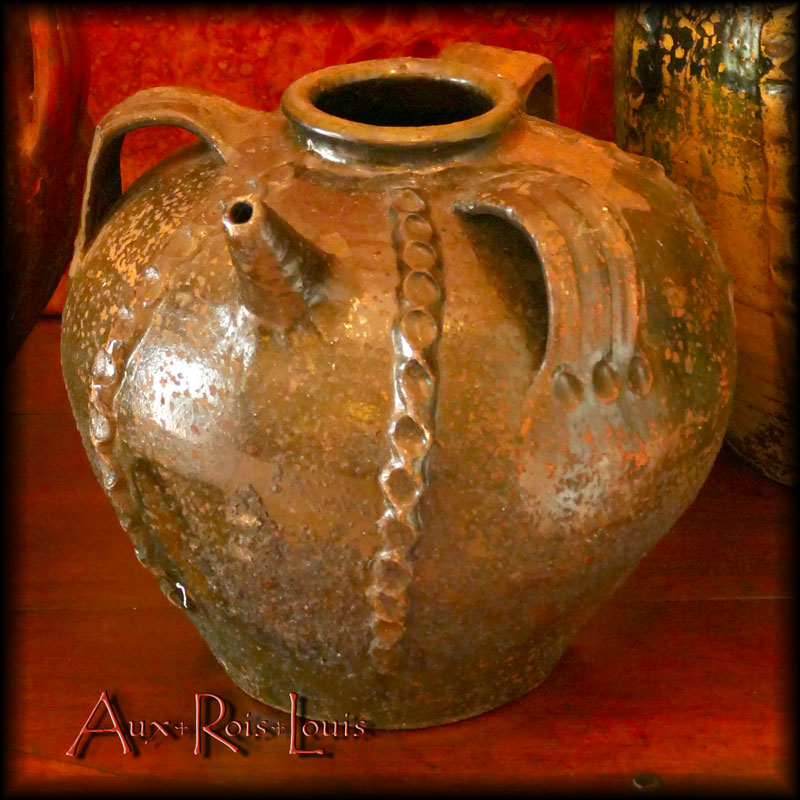 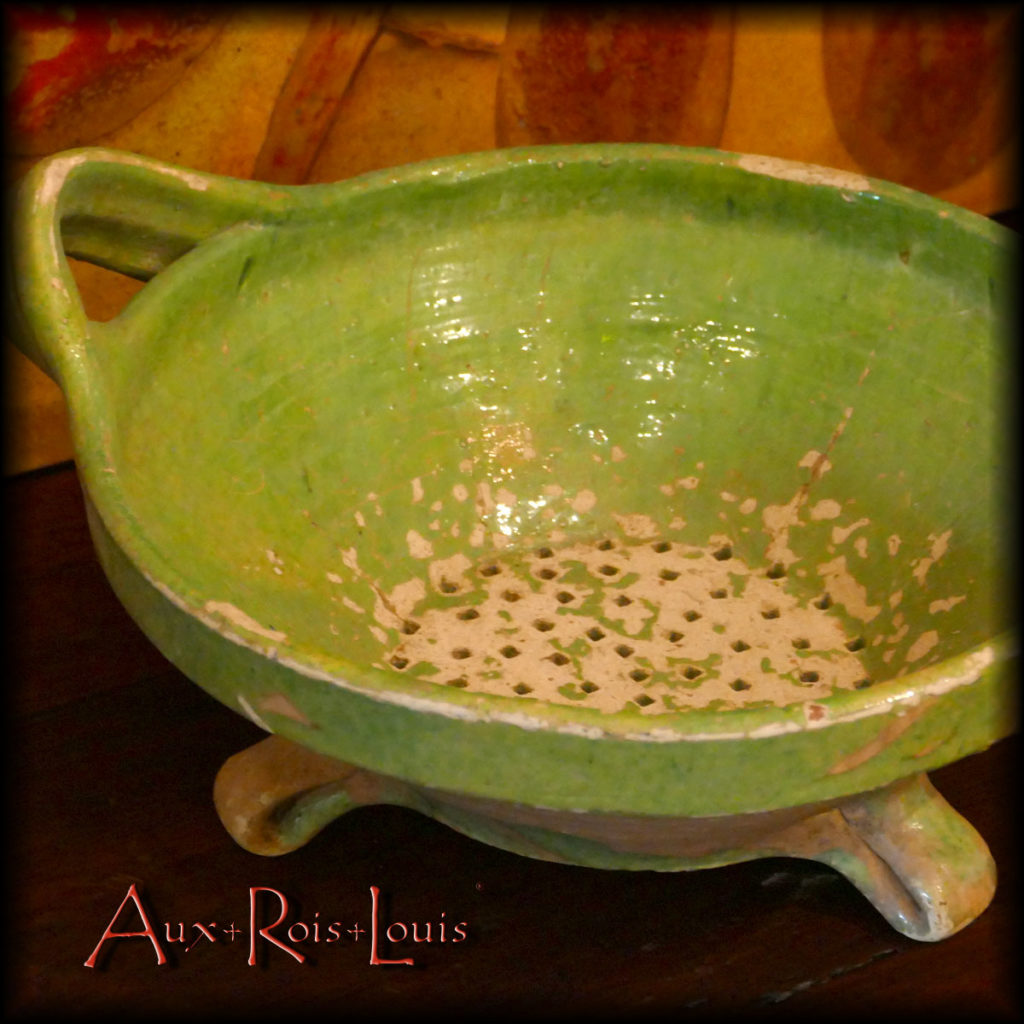 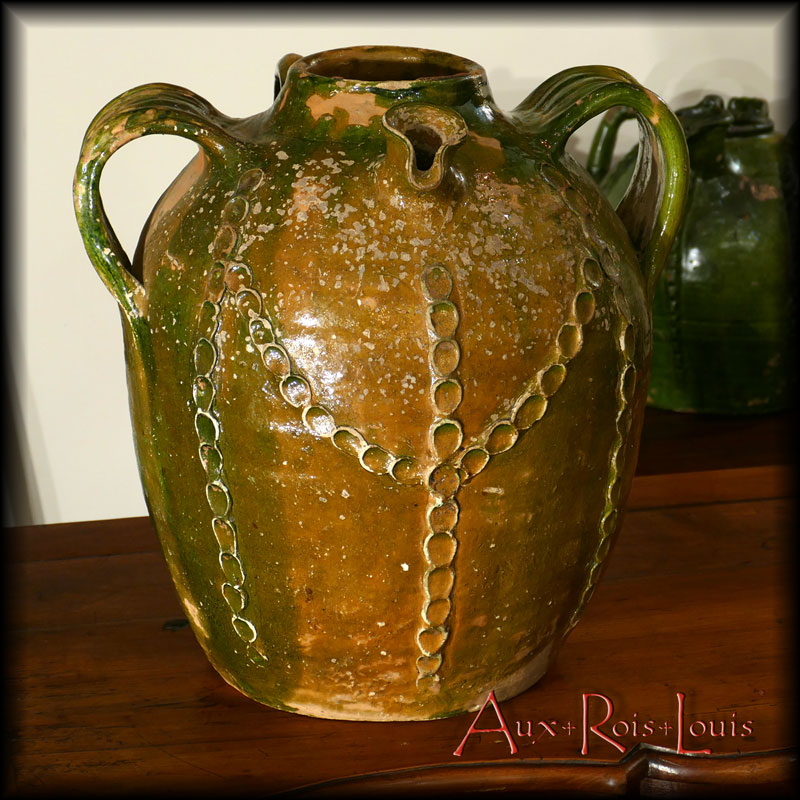 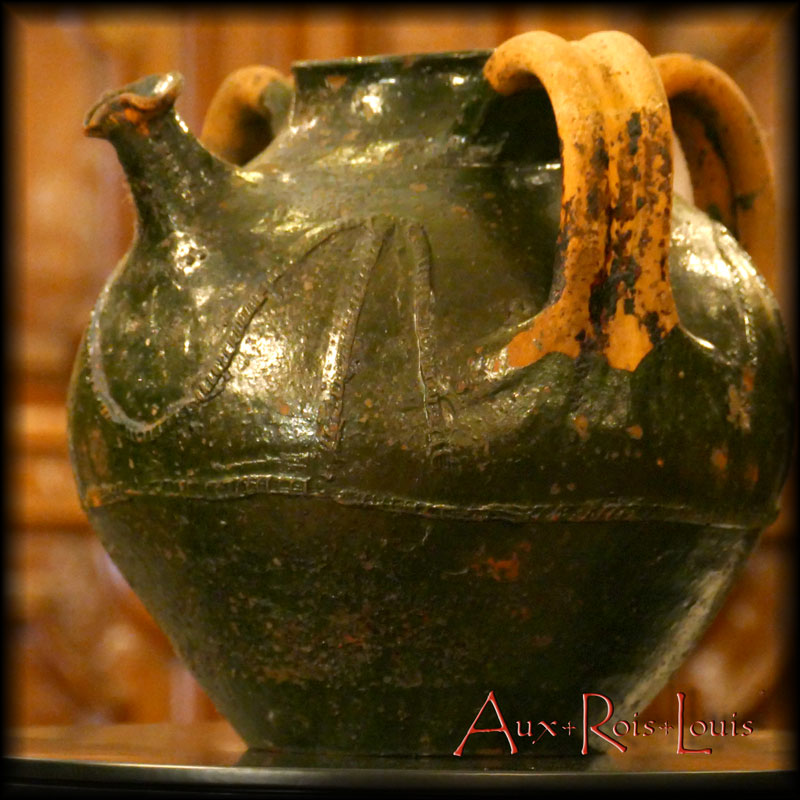 Green glaze decorated with coiled slip strands small pinched lip to give accuracy. Lack of glazing on sides possibly for a better grip-a trade mark – or the potter’s naesthetic choice. 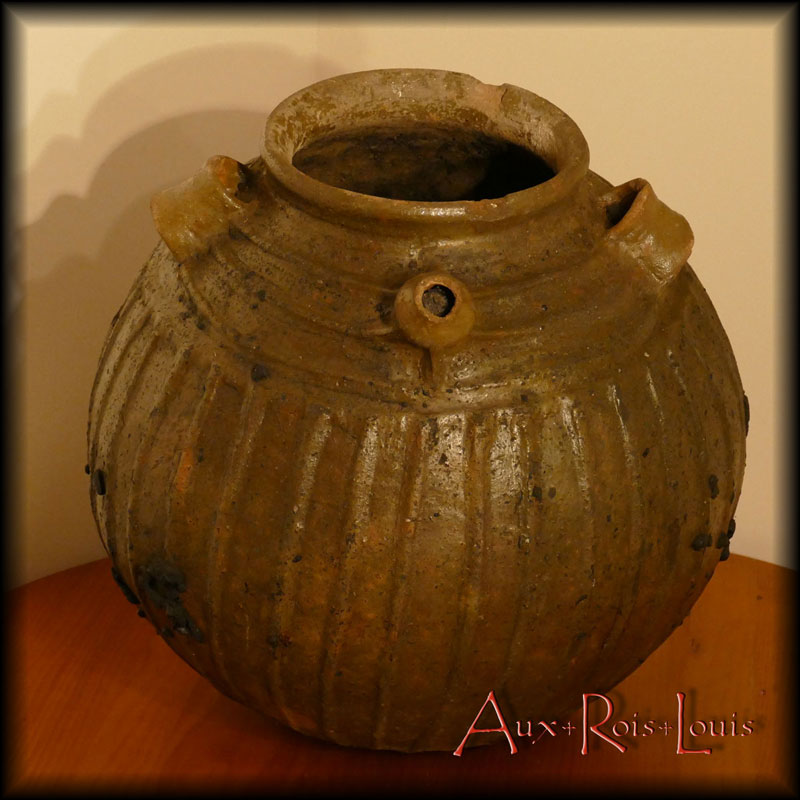 Decorated with horizontal and vertical strips and covered with a green glaze in perfect condition. Height: 55 cm, diameter: 53 cm